“Why do I keep breaking strings?!”

At some point, most every guitarist has gone through a string-breaking phase. For me, this was really about the first ten years or so of my guitar playing life. It seemed like I was always breaking strings, or playing a five-stringed guitar, or stringing a guitar with old strings. Along the way I learned how to properly string a guitar, which goes a long way towards extending string life. (We’ll cover that another time; I’ll attempt to sway you to my “more string is better” philosophy.) But what really changed was my technique, and, yes, the pick I chose to play with.

When I started out playing guitar I gravitated towards the whisper-thin nylon plectrums my dad used. Those picks were advantageous when it came to learning how to strum, but as I developed the motor skills to play, my fervor increased. Sawing away, pounding out power chords in my bedroom, time and time again I’d snap a string--usually the low A or E string. As I learned to play blues solos, string breakage moved across the fretboard, and soon the high E and B strings were snapping all over the place. Then came the big bends on the G string. It was all over from that point forward. By then I was using a .71mm pink Dunlop Delrin 500 guitar pick, taking the flak from my jamming buddies for having a wussy pink pick, preferring my “high road,” this-is-for-my-art attitude. I was right, even though I was still breaking strings at the rate of at least once a week.

What was going on? 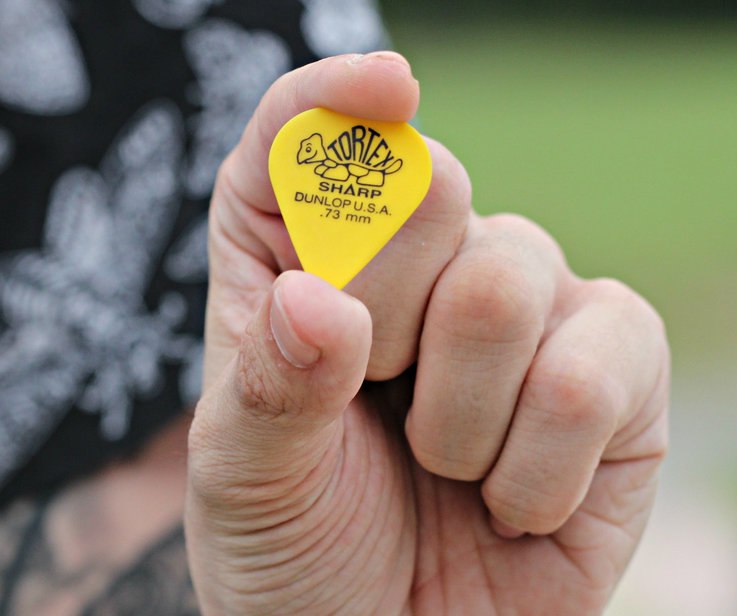 My theory is this: the lighter the pick, the heavier the attack on the string. The inverse of this is also true. Ever wonder how the hell Billy Gibbons gets away with playing .08’s with a silver peso? For years that mystified me. But then I started playing with pennies, nickels, Loonies, quid. I started experimenting with wooden picks, expensive picks (freakin’ Blue Chips--awesome picks if you’re a millionaire), credit cards, and really whatever pick-like-object I ran across. I found that my touch changed dramatically when I used a heavier pick. And my strumming hand didn’t move so much. I could dig in or play lightly. I found that to play with a coin, I really had to adjust the tone back a bit on my Stratocaster (Lone Star strat, Pearly Gates humbucker in the bridge). But it could be done. Soon I found that strings would stay on my guitar until they were worn out, not broken.

Maybe my development of touch was a response to my choice of pick, and maybe it was because I was buying more beer and had less money for strings. Either way, I’m glad I’ve got touch, but I can’t stress enough the difference the adoption of a heavy pick will have on your playing. 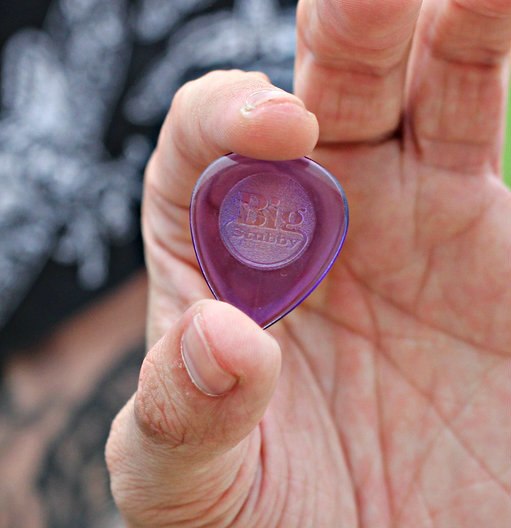 Today I use a 2mm Big Stubby pick, and I can’t stand it when I don’t have one. They feel great in my large hands--the divot in the middle really helps me hold on to the sucker--and they’re not too expensive (Blue Chip--jeez guys, “space age plastic,” gimmie a break). I play in a lot of bands--several of the guitar players I know have started using the Big Stubbies I leave lying around, and I’ve found that overall they now prefer them to their 1mm Tortex Dunlops. At the end of the day, remember that how you play is up to you. So find the pick that you love, and strum away!