As one of the greatest and most original harmonica players the world has ever seen, Sonny Terry remains an iconic role model for blues musicians around the globe. He influenced many of todays players with his signature sound and style, which helped shape the blues in the early 20th century. HOHNER commemorates one of the most influential artists in the blues harmonica scene. The harmonica is a specially made 10-hole diatonic in homage to the original instruments upon which he created his unique style. The instrument, a Marine Band 1986 with custom engraved cover plate and an orange/black lacquered pear wood comb comes is packaged in a beautiful vintage cardboard box. For fans, collectors and players alike, the box also contains a signature stamp, which is a replica of the stamp blind Sonny Terry used to sign autographs. The instrument, which comes in the key of C is handcrafted in Trossingen, Germany  the exact same town where the original Marine Band 1986, on which Sonny Terry played, was crafted.
Whats Included:
SERIALIZED: NO
SERIES NAME: Signature
COUNTRY OF ORIGIN: Germany
Product Code/SKU: M191101 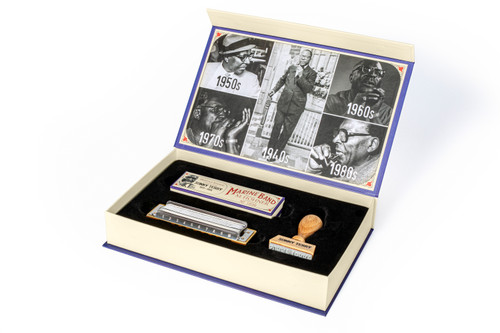